I’ve had a Logitech 700e outside the house for a while.  For some reason it died recently, first working intermittently, and now not working at all.

I’ve been looking at the Grandstream GXV series cameras, but I’ve been able to find little information about the mechanics of how they work.  I found a cheap used one on Ebay and took the plunge.  What I found right away was that it had been setup with a password.  Unfortunately the factory reset button on the GXV3672 is buried inside the camera.  I had to go hunting for it since I couldn’t find any info on it anywhere.  So, with that in mind I present the inside of the GXV3672: 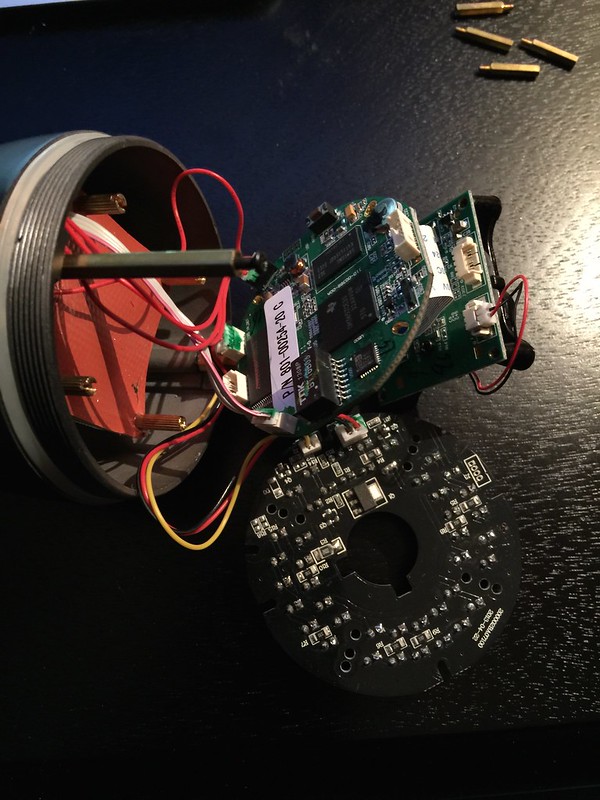 Opening the front of the can is simply a matter of unscrewing it.  The rest is also pretty simple, but you have to be careful to not pull apart the cables as they are “glued” together with a little bit of colored gel.  In the picture, the bottom ring is the IR LED board.  It’s held in place with the two long posts sticking out of the can.  Beneath that is the camera board (square) which has a foamy ring that has to be carefully removed.  Underneath that is the round board in the center of the picture.  The 4 brass posts you can see at the top of the pic standoff the camera board from that control board.  Again, it’s quite easy to take all of that apart, but be careful of the cables.  Looking at the picture, the factory reset button is at the top of the control board.  However, when installed, it’s on the underside.  If you knew it was there you might be able to use some sort of hook to push in the button without having to disassemble the other boards.  For me, I held it down for a few seconds with power connected and it cleared the config.

I also wanted to see if it would be possible to unplug the cables from the back.  The cables feed out the mounting post and have rather large plugs for the RJ45 and audio.  If I wanted to run this through an exterior wall it would mean drilling a really big hole.  I was hoping to be able to remove the cable at the other end, but that seems like too much of an effort, especially if I’m up on a ladder for putting it back together.  Incidentally, the orange colored thing inside the can is a heating pad.

So, there you go.  Because of the dearth of  information on these cameras I’ll be trying to put up more info as I work on them and use them.  I might be getting a GXV3610 as well.